Shahi Paneer is the most looked upon recipe as this is royal plus it gives you the eating satisfaction. The first thing we look around is any marriage or in a restaurant ii=s Shahi paneer. Paneer is something, which I like every time, but eating it with rich cashew gravy makes it more tasty. My husband is a hard core fan of the thick creamy gravy, though he doesn’t like paneer.

The recipe of Shahi paneer which I am sharing here does not contain tomatoes, rather it is made with thicj onion gravy using all the nuts like almonds, cashews and poppy seeds. The rich aroma is added by saffron strands and royal spices. I have added little amount of milk and some cream to make the texture more creamy and thick. You can avoid this, keeping it more of a healthy option.

Shahi paneer is ideally served with garlic naan or Tandoori Roti but the breads can also be replaced with steamed jeera rice. This is a perfect dish for any guest coming at home. 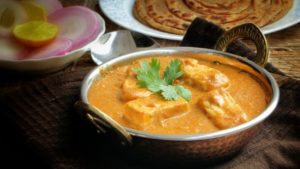