Besan ke gatte are my mom’s favourite and this recipe is dedicated to her.

Besan gutte is an authenticated dish of the Rajasthani cuisine. It is made using besan or gram flour as the key ingredient. These are basically the dumplings made of gram flour and boiled in water. You can also deep fry the dumplings but I have always boiled them in water. After boiling you can also saute them in a pan with a tea spoon of oil to give the dumplings a crunchy taste and reddish texture. The gravy can be made with tomato paste and curd , but since I am a hard core fan of onion and garlic, I have made this recipe with a gravy of dominating onions and garlic. The gravy is slightly spicy, you can adjust the spices as per your taste. Besan gutte can be enjoyed with roti or rice. 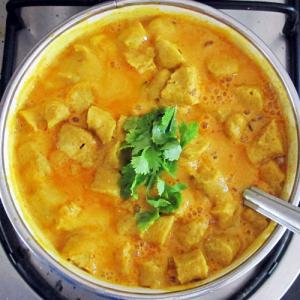